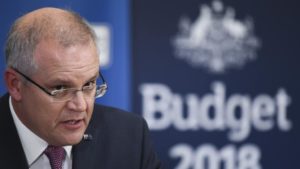 The main focus of this year’s budget is to provide tax relief to lower and middle income Australians, to back small businesses, guarantee essential services, keep Australia safe and secure, and to keep spending and taxes under control.

The Government revealed a seven-year personal income tax plan for “lower, fairer and simpler taxes” with relief for low and middle income earners, starting 1 July 2018. The measures will also tackle bracket creep. From 1 July 2018, the Government will provide a tax offset of up to $530 for tax payers in the 2018-19, through 2021-22 financial years.

Small to Medium Sized Businesses
Attention to small to medium sized businesses was targeted at keeping them competitive globally. The Government extended the $20,000 instant asset write off for a further 12 months to 30 June 2019 for businesses with a turnover of up to $10 million. Tax cuts for small business began in 2016-17 when companies with a turnover  of less than $10 million had their tax rate cut to 27.5%. This rate was extended to companies with annual turnover less than $25 million in this financial year and from 1 July 2018 will be expanded to include companies with annual turnover less than $50 million. The Government also announced tough new anti-phoenixing measures to stop businesses who deliberately go bust to avoid paying their bills and potentially affecting other businesses through their demise.

Superannuation
The focus on superannuation was on lost super and allowing Australians to build their super balances by saving unnecessary fees and unwanted insurance. The ATO will be given powers to send lost super to people’s active super accounts. Fees on accounts with balances of less than $6,000 will be capped at 3% and superannuation fund exit fees will be abolished for those wanting to switch funds. For superannuation fund members aged under 25, they will need to opt in should they wish to have insurance within their super policies.

For SMSFs, the maximum number of members will increase from 4 to 6 people from 1 July 2019. This will allow for
greater flexibility for larger families. In addition, the audit requirements for SMSFs will move from annually to three
year periods for funds with a history of good record keeping and compliance.

For Older Australians
The Pension Loans Scheme will be open to all Australians, including full rate pensioners and self-funded retirees to enable them to boost their retirement income by up to $17,800 pa for a couple, without affecting their  eligibility for the pension or other benefits. An expanded Pension Work Bonus will allow pensioners to earn an extra $1,300 a year without reducing their pension payments. This will also be extended to self-employed individuals who can now earn up to $7,800. People aged 65-74 with a total superannuation balance below $300,000 will now be exempted from the work test for voluntary contributions for the first year they would otherwise fail to meet the work test.

Aged Care, Skills Training, Medicare and the PBS
For older Australians who would like the choice to remain in their homes and avoid residential aged care facilities, there will be a total of 74,000 high level home care places funded by 2021-22. A new Skills Training Incentive will provide mature aged workers with the opportunity to update their skills. And, employers will be incentivised with $10,000 wage subsidies for employing mature workers. Extra funding into Medicare and the PBS will see new medications being funded including those to treat spinal muscular atrophy, breast cancer, refractory multiple myeloma and relapsing-remitting multiple sclerosis and an HIV preventive drug.

Finally, please remember that although the Federal Budget generates media frenzy, most of the major changes announced are only proposed changes. They will not come into effect until passed by both Houses of Parliament and receive the Governor General’s Assent. We will advise you when these changes are passed and come into effect. As always, feel free to contact our office should you wish to discuss any of above in more detail.

Important Information and Disclaimer: This information has been prepared by BT Financial Group which is the wealth management arm of Westpac Banking Corporation ABN 33 007 457 141 AFSL and Australian Credit Licence 233714 (Westpac), and is current as at 9 May 2018. Material contained in this publication is an overview or summary only and it should not be considered a comprehensive statement on any matter or relied upon as such. This information may contain material provided by third parties derived from sources believed to be accurate at its issue date.

MK Wealth Solutions is a Corporate Authorised Representative No 100223 of Synchron ABN 33 007 207 650 AFSL 243313. The information provided in this article has been provided as general advice only. We have not considered your financial circumstances, needs or objectives and you should seek the assistance of your personal financial adviser before you make any decision regarding any products mentioned in this article. Whilst care has been taken in the preparation of this material, no warranty is given in respect of the information provided and accordingly neither MK Wealth Solutions and Synchron, nor its related entities, employees or agents shall be liable on any ground whatsoever with respect to decisions or actions taken as a result of you acting upon such information. Any general tax information provided in this publication is intended as a guide only and is based on our general understanding of taxation laws. It is not intended to be a substitute for specialised taxation advice or an assessment of your liabilities, obligations or claim entitlements that arise, or could arise, under taxation law, and we recommend you consult with a registered tax agent.

Your email is safe with us.

General Advice Disclaimer
The information provided on this website has been provided as general advice only. We have not considered your financial circumstances, needs or objectives and you should seek the assistance of your personal financial adviser before you make any decision regarding any products mentioned on this website. Whilst care has been taken in the preparation of this material, no warranty is given in respect of the information provided and accordingly neither MK Wealth Solutions and Synchron, nor its related entities, employees or agents shall be liable on any ground whatsoever with respect to decisions or actions taken as a result of you acting upon such information.